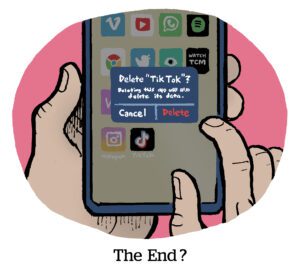 Step into a time machine to the distant past: the summer of 2020. TikTok faces an existential crisis. It is embroiled in US politics ­– a Chinese-owned app when China was a major boogeyman during the final year of President Donald Trump’s term. Bytedance, TikTok’s owner, was almost forced to sell the US business to some combination of Microsoft, Walmart and Oracle.

Having emerged from that near miss with a new lease on life – I mean, imagine TikTok co-owned by some combination of Microsoft, Walmart and Oracle (*barf emoji*) – TikTok buckled down and got to work.

In the two years since, the TikTok app hit its growth spurt and shot ahead of the likes of Snapchat, Twitter and Pinterest. But the ad platform is still a wobbly toddler. The company must navigate a tricky evolution as its ad tech catches up to monetize its billion-strong user base.

TikTok is no longer the shiny new thing in advertising, where it can hang out in a brand’s “test-and-learn” budget. If it is a major scaled platform alongside the likes of Google and Meta, TikTok must prove its ads perform.

“It takes a lot of convincing for clients to fork over money on TikTok without seeing in-platform results,” said David Herrmann, who owns a DTC-focused media agency.

The general dynamic with walled gardens is that they over-report conversions. Add up self-attributed sales from Google, Amazon, Meta, Snapchat, etc., and total conversions will far outnumber actual sales of your product in that period. Marketers must whittle down reported conversions to the actual incremental value of each platform.

That’s not the case with TikTok, which dramatically understates its own conversions.

“We have reason to believe TikTok’s attribution is too conservative and they are underreporting the business value by an order of magnitude,” said Ian Yung, VP of Growth for the bedding and home decor company Parachute, which began advertising on TikTok in January.

TikTok’s attribution is basic. It uses only last-click measurement and has a one-day attribution window on ad views – so brands that served someone an ad can only credit that ad in the shopper journey if the sale happens within one day.

Yung said it takes an average of seven to 10 days for a Parachute ad to lead to a sale.

Every ad platform has upended its attribution system since Apple went wide with iOS 14.5. But Google and Meta took major steps to adapt their methodologies and continue to demonstrate results. Google stopped using last-click as its default and both platforms switched from primarily deterministic attribution (or showing which individuals were targeted and then converted) to probabilistic modeling (or aggregated data indicating an entire campaign generated X conversions).

TikTok’s addition of third-party site pixels will help – currently, it misses practically every conversion it generates on a DTC-owned site.

TikTok has one attribution advantage, Herrmann said, in that its platform is improving overall while Google and Meta in particular suffer setbacks.

But TikTok must improve its attribution tech in a hurry. Digital-native brands like Parachute and other big social media spenders will commit to TikTok and work hard to find a paid media strategy that works, even if TikTok’s self-reporting is ineffective. But to expand its pool of demand to major traditional brands or small businesses, as Google and Facebook have done, advertisers need to see results in the platform.

Is TikTok too organic?

Attribution is critical too because many brands only use TikTok organically. They set up accounts and post videos, but don’t advertise. TikTok’s strength as an organic channel is working against the ad platform, in this case.

With a good social media exec or agency, brands can reach hundreds of thousands or millions of views on videos without spending a dime to boost content.

Viral organic numbers don’t exist on Instagram or YouTube, which are pay-to-play channels now, St. Amand said. There is very little organic reach on Instagram without a strong paid media plan in the background.

Many companies, especially those that don’t target teenagers, will be content with the organic reach on TikTok, especially if the purported ad platform results are so poor.

TikTok’s poor ability to claim credit for ad campaign performance will be its toughest problem to solve, but the other half of the ad platform consists of targeting and audience tools. And TikTok can make up ground quickly on targeting compared to Google or Meta.

TikTok’s search-based campaigns have another neat trick, he said, since advertisers can identify which particular search terms or phrases led to sales on the platform. Meta doesn’t report that level of detail, because purchases happen elsewhere and it can’t connect the on-platform searches to sales. In contrast, TikTok has a high rate of on-platform or last-click shopping among its users and can show which search terms prompted a purchase.

Meta also did a major spring cleaning of its interest-based targeting in March of this year as part of a privacy overhaul. Its new interest-based targeting restrictions aren’t just about products that could be problematic (supplements are one such product, alongside crypto brands, say, or sports gambling apps) but interests that could be attached to how users feel about themselves or how they look. The overhaul came after a whistleblower last year revealed internal memos by employees concerned about the platform’s impact on the mental health of teen girls.

Because of those changes, “we had to kill all interest-based targeting on Facebook and Instagram,” said Alexa Kilroy, former Senior Manager of Creative Strategy for the vitamin and supplement brand First Day, who just last week was poached by the social media and ecommerce analytics company Triple Whale.

First Day vitamins previously targeted interests like vegan diets, physical health and self-care. Those are gone. Parental targeting for vitamins for kids went away, as did targeting for parenting-based interests.

Kilroy said First Day vitamins also has products for older people – such as joint support supplements – and would target for age-related interests. First Day would also target by organizational affiliations – namely, the AARP. That too is gone.

Cosmetics, lifestyle and fashion brands that target audiences by topics like wrinkles, fitness or practically anything to do with appearance saw interest-based targeting evaporate as well.

“We went from advertising to warm leads to essentially putting a billboard up on Facebook and if you saw it, you saw it,” she said.

At about the same time that Meta deprecated interest-based targeting, TikTok began allowing interest and hashtag-based targeting for those same categories.

As TikTok works on building an ad platform and attribution system to earn its spot in big media plans alongside the major walled gardens, one of its main advantages is that it is a scrappy upstart. TikTok is lenient in ways they aren’t, and will do whatever it takes to accommodate advertisers.

For example, TikTok has extremely liberal payment options for brands who work closely with the platform or with agencies in its partner program.

Meta and Google ad accounts are linked directly to a bank account or credit card and the platform gets paid daily up to the billing threshold. There is no running up a tab on Facebook or YouTube.

TikTok, on the other hand, will front the agency money for a campaign and allows a 30-day period once the final ad has been served for the agency to pay it back, St. Amand said.

TikTok will literally wire money into the agency’s account to get the campaign going, he said.

TikTok also has a “hidden version” of the platform for brands that go through managed services – which is to say, particular agency partners – according to Kilroy.

With managed services, human beings approve campaign creative and business platform accounts, Kilroy said. Many brands, particularly a vitamin seller like First Day, would have campaigns halted if they use self-service, but get an easy approval through TikTok’s managed service.

These aspects of TikTok’s platform won’t last forever. TikTok can afford to add a human touch to its managed service business because it doesn’t have an overwhelming number of brands coming onto the platform. If TikTok is going to have millions and millions of advertiser accounts someday, it will need to have effective automated ways to approve campaigns.

Likewise, the agency-friendly payment policy must go away at some point. There are foreseeable PR risks – such as fronting the money for a brand that sells items on TikTok and then never delivers them, or commits other fraud. Not to mention the chance of wiring money to an agency that never pays it back.

These practices are anathema to public market investors and TikTok will grow out of them. But they’re fun while they last.

Another one of TikTok’s advantages – that gives the platform a more durable edge – is its roots in shopping and ecommerce.

Advertisers can link their Shopify accounts to TikTok or direct users to in-app TikTok shopping pages, so the credit card is stored and users can simply click to purchase, said Fraser Cottrell, Co-Founder and CEO of Fraggell Productions, a video creative and advertising agency focused on DTC brands.

TikTok introduced its native shopping service in the UK and Europe last year, and has rolled out in the US in the past six months or so, he said.

Meta is trying to change that by incentivizing brands to direct traffic to Shops with discounts and subsidies.

“We had some clients direct traffic to [Facebook and Instagram] Shops last year with the ad program to take advantage of the discount,” said Rok Hladnik, CEO of a boutique social media performance agency.

But so far in 2022, none of Hladnik’s clients have directed ad clicks to Facebook or Instagram Shop pages, even with the discount.

TikTok shopping has serious traction. Partially because TikTok is actually more open to sending users off-platform to purchase. Unlike Facebook, which practically forces users onto its in-app browser (you must copy and paste a URL and then manually switch to a browser app to visit the site), TikTok offers users the option to leave the app and link directly to the outside browser.

Allowing people to leave the app is a user-friendly move that encourages shopping behavior, Kilroy said. Plus, now that TikTok collects third-party site cookies, the traffic dished out to browsers will be more reliably attributed back to TikTok ads.

Someone who discovers a product on Instagram might research the item on Google or Amazon, he said. Nowadays (for the youngs, at least), those commerce-related searches often start and end on TikTok.

Triple Whale Co-Founder and CEO AJ Orbach was previously an independent Shopify merchant who sold women’s clothing and accessories. “But if I was a DTC seller, I wouldn’t just be using the platform for advertising,” he said. “I’d be doing product research and designing and manufacturing products specifically for TikTok.”

Triple Whale is putting its money where its mouth is, too. It recently hired a TikTok account manager to lead B2B advertising to brands and ad buyers on the platform who might need its analytics service.

“I can’t tell you yet if that’s actually helping us,” he said. “But we’re seeing the views come through.”